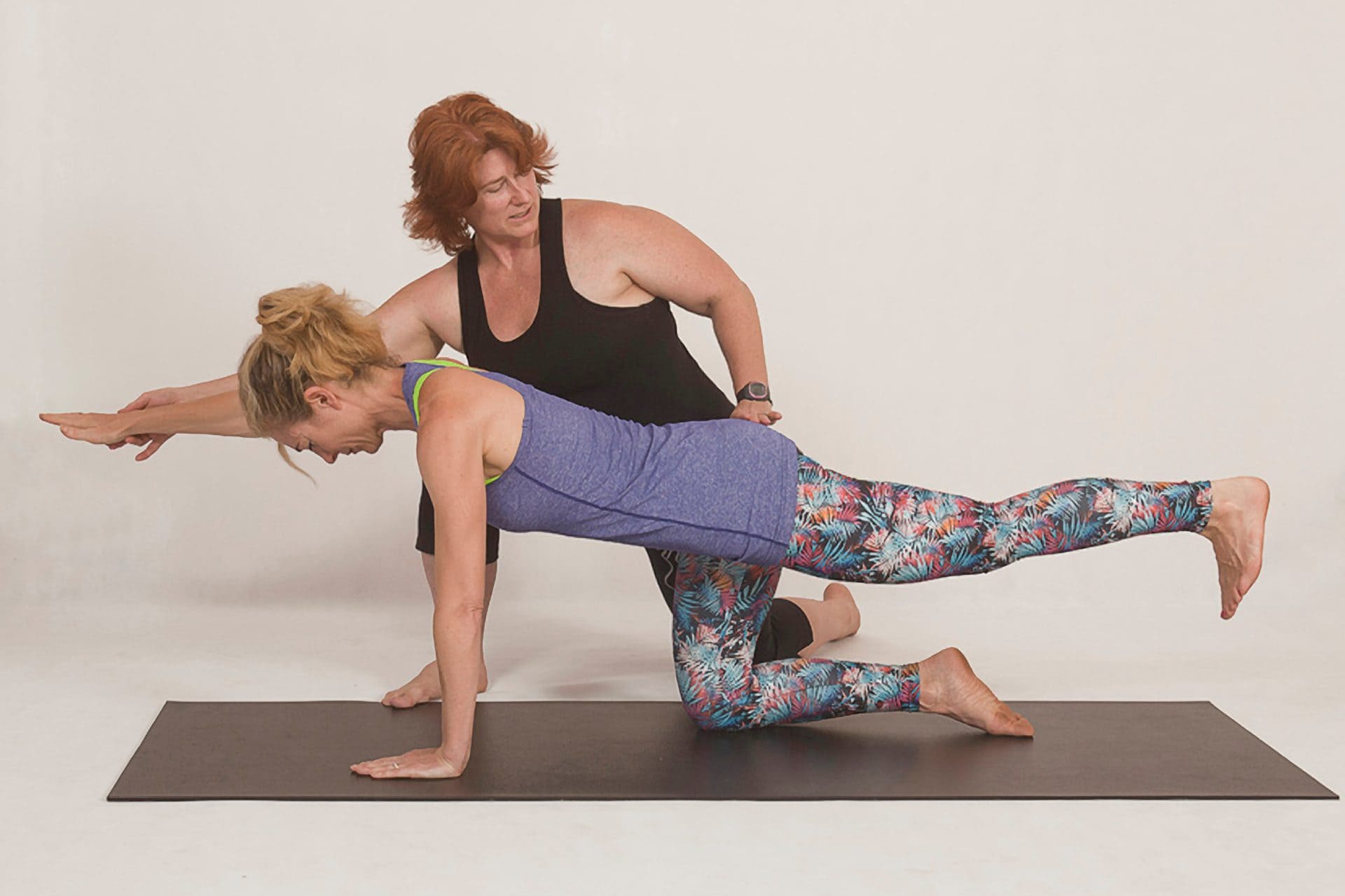 When I first underwent my teacher training in 2004, IYTA had a strict no touch policy. However, I noticed all my favourite teachers (not necessarily all IYTA teachers) used some form of touch in their instruction.

I am a visual and kinaesthetic learner. I copy and I need to move and feel where my body is in space. But what works for me is not necessarily going to be the best delivery for a different student.

As teachers, we need to consider all the different ways a student will best be able to achieve a pose that suits their abilities and learning pathways.

Ultimately, we should aim for our students to become their own inner teachers of their yoga practice but in the meantime, we are the guides on their yoga journey.

Mostly our students tell us when they have an injury, but sometimes they don’t and you discover they have a condition that they didn’t tell you about. Then there are students who don’t know their limitations or those who have a false sense of proprioception, (their perception of movement and space in relation to their own body).

These students believe and feel that they have their bodies in the correct position, however, the reality of their alignment, (to a teachers’s eye), is not correct.

I would argue, that we need to be very careful when guiding and instructing our students, as we have no idea what is happening in their bodies or what their mental and emotional states are. Given this background, why is touch still needed?

Types of learning and partner work

There are three types of learning: auditory, visual and kinaesthetic

Students have a preferred way of learning or a combination of these methods. For this reason, especially for the kinaesthetic learners, touch is a useful resource for teachers, however, permission should be asked first from the student.

Recently I was teaching two postures in my classes that required some partner work. Working with partners can give really valuable feedback and also be a lot of fun. It also requires good communication between the participants and involves consideration, being respectful of each other and physical touching.

I find the occasional partner yoga helps to foster a sense of community with my students, to the point where it can be hard to stop them talking and focus on the actual yoga. Some students love the contact with other people but there are others who absolutely hate it. I always give people the option of not working with a partner beforehand, especially in cases of injury or trauma and I allow them to participate in modified ways.

Human beings, on the whole, are social creatures. We like the physical connection and touch with our loved ones and friends. Handshakes are a polite greeting between strangers. And for those beings who live alone in this busy digital world, the yoga class could be their only connection with their local community.

I have had students who will come up and tell me they like and want to be corrected within a class. And I’m aware of students who definitely do not want to be touched in any form. Hence, do not touch your students unless you have their permission.

IYTA, in the last few years, has now introduced a Low Touch policy. We believe that touch is a valuable cue to supplement verbal cues and demonstration. But the emphasis is on low touch, with no adjustment. So, what is low touch and appropriate touch as opposed to adjustment?

Physically moving a student is adjustment. A teacher should not be forcibly move a student into a position or asana. This reduces the options and choices of students to control their own bodies. When students are moved into a position from an outside force, their learning of alignment in their bodies is diminished. If they are guided to an alignment by the use of their own volition, which means having to engage their spatial awareness, muscular movement and mental faculties then they will absorb the teaching more thoroughly.

Injuries can and do occur in yoga. Consider your actions as a teacher from a place of safety, non-violence and legal implications if you cause harm.

What is light touch?

Light touch is sometimes needed when students are so disconnected from their bodies that they find it difficult to understand those verbal or visual cues. When giving instruction the preferred direction is to have the student move towards your hand so that they are in charge of the movement and they can decide where to stop.

The other form of touch is 2 fingers brushing against a particular part of the body in the direction you would like the student to move. Of course, bear in mind there are certain parts of the body that are best avoided touching altogether such as the chest, buttocks, face etc.

Be mindful of where you are positioned in relation to your student. For example, for someone in a downward dog position it can feel very vulnerable. It is a very exposed posture of sensitive areas. You are unlikely to be aware of which students in your class might have suffered abuse, rape or trauma.

So, in these sorts of postures, where the head is down the awareness may be diminished, it is important to first of all come down beside them at their level to talk first. I may ask them to bend the knees to help lengthen the back. But, I’m sure some of you may have found, when a student’s head is below their heart, they can get confused very easily with instructions and do the opposite of what you’ve ask. If that is the case I may place two fingers behind the back of the knees to encourage that softening in the knees. I may then use a light touch to guide them to move the hips back. I definitely do not stand behind a student, grab their hips and pull them back towards me. This is an adjustment that could have trigger trauma in some people or basically make them uncomfortable.

I see many students in the Plank position who collapse into their spines and let their shoulder blades sink to the middle. I find a light touch between the shoulder blades with a verbal cue of lifting their spine towards the touch helps them attain a better alignment. Again, they are in charge of their own movement.

Looking at another reason to touch or not, from a slightly different angle

In the last few years in my classes, especially at the gym where I teach in Sydney, there has been a large cultural shift in the attendees. Sydney is rapidly expanding and we have many immigrants moving into the suburbs. Where my students were predominantly Anglo Saxon and could all understand my words, if not my intention, when giving instructions. Now, I have at least a third to sometimes half my class made up of Asians and Indians. English is their second language and in a few cases some have very little or no English.

I can give all the best verbal cues in the world and it will have no meaning to these students. They rely heavily on visual demonstrations to move through the class and sometimes to keep them safe I need to guide them with my hands. Now it’s even trickier to obtain permission from a student if they are OK with being touched if they don’t understand the question. There are also many cultural differences between East and West, male and female. As a female teacher I am very careful about touching a male student in my class and I hope the male teachers are equally mindful of the implications of touching a female student.

In conclusion, our students should be able to feel safe and supported in our classes. Mark Stephens says in his book Yoga Adjustments: “Giving tactile guidance should help students in developing a safe, sustainable, and transformational practice, but done wrong, it can cause physical or emotional harm.” Touch is but one useful tool in a teacher’s repertoire of instruction, use it sparingly and carefully.