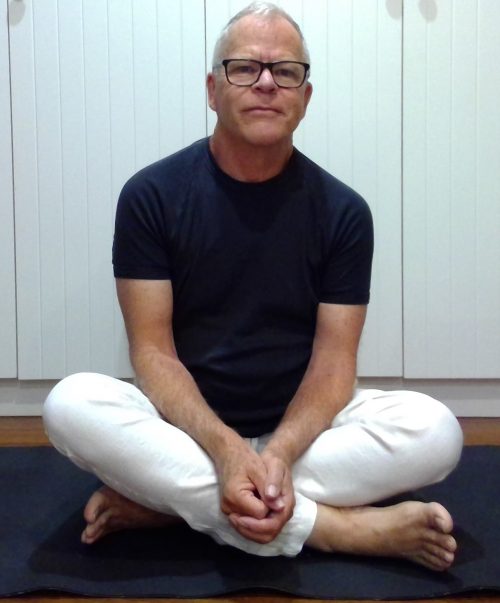 Since graduating from the IYTA’s Diploma of Yoga teaching a year ago, August Smits has found his niche – teaching yoga to the broader community.

August teaches four weekly classes – sharing the benefits of this ancient practice with two mens’ only classes, a yoga class for staff at the Sydney Children’s Hospital and a Chair Yoga Class for cancer patients.

August says: “Part of my philosophy is to open up yoga to a broader community. I think less than 20 per cent of practitioners are men, so two of my weekly classes are purely for men.

He adds: “Teaching yoga with honestly, generosity and compassion gives you insight into who you are.”

He says the key to teaching to the broader community is to run the practice at a slower pace and adjust everything according to who is in the class.

He doesn’t do headstands or shoulderstands. It’s the simpler poses he focuses on, but doing them safely and slowly. “It’s also lighthearted,’ he says with a smile. “And we have a lot of fun!”

Teaching yoga has given August a more balanced and fulfilling work, life balance. The 67-year old works as an architect two to three days a week, teaches yoga and spends the rest of his time relaxing with his family – including his two young grandchildren.

One of the main reasons August has been able to create this life is due to his studies with the IYTA’s Diploma of Yoga Teaching. The year-long course helped him further his knowledge and passion for yogic philosophy, asanas and learn how to teach classes and adapt poses for all levels and ages.

He says: “It’s a tiny investment for such a phenomenal wealth of knowledge and experience.”

August chose the IYTA course because it was a 460-hour course. He says: “I knew that a 200-hour course would only just scrape the barrel of what there is to learn.”

He says he believes many students fall into the “trap” of enrolling in a cheaper, shorter course, but find themselves lacking confidence and not being able to fully comprehend the depth of yoga required to be able to teach.

He particularly recommends the IYTA Diploma of Yoga course because it is not commercially driven. The IYTA is a non-profit organisation so it is not based on a business model, but offers on-going support and membership of an international yoga community.

August spent time researching yoga schools as he was keen to learn in an environment which was open and friendly to a broad demographic. He said he found the course (which was held both online and face-to-face throughout 2020), physically challenging, but believes he is much fitter and self-aware as a result.

He says: “Physically I have my limitations, but I found that to be more of a benefit than a hindrance with the students I tend to attract.  People can relate to me and I don’t take them anywhere that could be unsafe for their body.”

August is also quick to emphasise that age shouldn’t be a barrier to practise. He adds: “Age isn’t an issue with me personally I have a lot of students well over 65 and they’ve always got a conversation in their head that they are too old. I tell them to forget their age – and not to let it limit them.”

So if you are looking for a new challenge this year – especially if you are older – then why not discover the joy of yoga – both professionally and personally to enrich and enhance your life.

The IYTA’s Diploma of Yoga course begins in February 2022. Come along to our FREE online information session on Wednesday, January 12 to find out more!