Transform with the breath 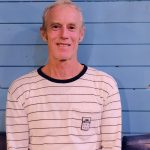 ago… he’s now teaching others the tools that have transformed his life.

Gyan will be leading the workshop:

Experience the Purpose of Pranayama

We caught up with Gyan to find out a little more about his yoga journey.

Q: When and how did you first experience yoga?

Gyan: I’d been to a naturopath because I was having a lot of stress in the early nineties – I was working as a company manager at the time and I was finding it difficult to sleep.

As I left she gave me a cassette and told me to play it before I went to sleep at night.  I found out ten years later (after attending Mangrove Mountain) that it was a Yoga Nidra.

Q: Did it help you sleep?

Gyan: Oh definitely! It fixed up my sleep issues. I rarely experienced the nightmares after that, and every time I played that cassette I slept like a baby and I didn’t ever get to the end of the recording!

Q: So how did your experience of yoga develop?

Gyan: In the late 90s I went with a mate to Simon Borg-Olivier’s classes which I really enjoyed. I was going to a couple of classes a week – mostly asana and pranayama. Then I hurt my shoulder sometime in mid-2002 – I was around 40 years old at the time. I’d been to Mangrove Mountain and I thought I should learn about meditation. They were running a weekend meditation course and so I did it and loved it.

After that I did lots of weekends up there before heading overseas for a year.

I spent a month in Kerala, India and then a month at the Satyananda ashram and a month at the Osho Centre in Pune, before going to Sweden and attending a three-month Kriya Retreat at the Scandinavian School of Yoga and Meditation.  I spent another six months in Asia before returning to Australia and that’s when I realised how many things had shifted in me in the most positive of ways.

Q: What had changed for you?

Gyan: All of the things I’d done before finding yoga just fell away – drinking alcohol, partying, hunting… I quit my job working in the family business and a long term relationship ended.

These things just fell away… and I wanted to know why yoga had made such an impact on my life, so I did one module of the Satyananda Yoga studies course, then another and by the time I’d finished the first four modules – I decided to do the full teacher training. I ended up living in the ashram for the next three years. During that time I was very fortunate to have very experienced teachers such as David Burgess, Shankardev, and Satyadharma. I then lived and taught at Manly Yoga from 2011 – 2016, and taught at the new centre for another 3 years.

Q: What are you doing now?

Gyan: I’m now teaching on the Northern Beaches of Sydney – although I was supposed to be doing another one-month retreat in Sweden, but obviously had to cancel that due to the pandemic! And I’m running the workshop for the IYTA on Pranayama.

Q: Why focus on Pranayama?

Gyan: It expands and balances and focuses your energy in ways that you can’t really get from other forms of exercise, nor other aspects of yoga. With correct technique you can biohack your nervous system for specific outcomes, whether it be to energise, calm or focus the mind for example. And it can really help to prepare you for meditation. Pranayama is a practice I do regularly. And I feel with a lot of current yoga establishments and teachers there is not enough emphasis put on pranayama – most of the emphasis is put on asana.

Q: What can people expect from the Pranayama workshop?

Gyan: I am running the workshop together with Alana Smith and we will be starting the session with a prana nidra – so if people aren’t familiar with their own flow of prana they get to experience it. We will then introduce some specific pranayama practices so the participants can understand and experience what the effects are when the breath is manipulated in different ways, and in doing so know which particular practices are most suitable to obtain particular outcomes.

Q: What is a prana nidra?

Gyan: A prana nidra is like a yoga nidra but it is about getting in contact with your pranic state. It is an exploration of energy and to help people access stillness.

In doing this practice you are waking up dormant energy. It is revitalising, but not in an exaggerated way – in a therapeutic way.

The workshop will also cover a range of yogic breathing practices and more.

To find out more or book into this workshop click HERE