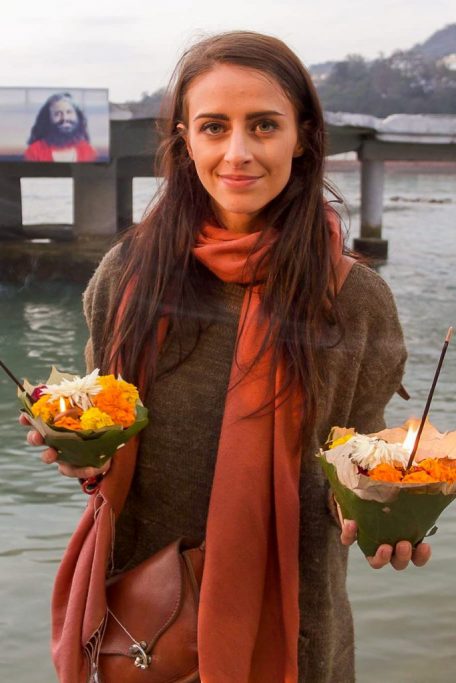 Discovering mindfulness as a teenager led Tara Van Toorn to practise yoga at an Ashram on The Ganges. She’s now a yoga teacher, a mum-of-two – and our new IYTA Membership Secretary.

Here she tells us a little more about her yoga journey…

As a teenager, Tara Van Toorn practised mindfulness as a way to regulate her emotions.

She says: “Mindfulness led me into yoga – both practices helped immensely with the big emotions associated with being a teenager – and I just fell in love with yoga.”

After leaving school, Tara went to University where she studied Social Sciences, focusing on criminology and criminal justice – and she was keen to help reduce reoffending rates in the younger population. She says: “I’ve always been interested in how the mind works, mental health and how we can keep ourselves healthy and manage emotions.”

Once Tara graduated, she headed to India, where she immersed herself in yoga – staying at a beautiful ashram in Rishikesh and travelling the country. She met her (now) husband, Brent, a New Zealander, in Thailand and they worked and lived in Japan for 18 months before settling in Sydney.

Back in Australia, Tara found part-time work in a corporate marketing role. It wasn’t quite what she’d planned, but she enjoyed the job – and the freedom it gave her to continue to explore her passion for yoga. She became a mum to Bodhi and two years later, had another son, Phoenix.

By this time Tara and Brent had moved to Jamberoo, NSW and Tara spent her lockdowns finally completing her yoga teacher training.

She says: “Once I had children I started to feel like I wanted to make a positive difference in the world. I knew how yoga had helped me and I was keen to share that with others. I particularly love the philosophy of yoga.

“When I came to Jamberoo I was so lucky to find the retreat where I now teach and I attended Alana Smith’s yoga classes for my personal practice.

“Alana and I hit it off. We’re very similar and I’d often stay after class – and we’d do private kirtans together!

“When Alana mentioned the job as Membership Secretary with the IYTA I was very excited. I felt like this was an opportunity for me to combine my work skills with my passion for yoga.”

Tara says she is drawn to the IYTA for its strong history, ethics and sense of community. She’s only been in the role a couple of weeks, but she’s already loving it.

She adds: “I’ve had some beautiful calls from people who have been members for 30 years or more. It’s been really joyful and wonderful to chat. I’m keen to get involved with projects to celebrate the members and I’m looking forward to getting to know our members and fostering a sense of community as the Membership Secretary.”