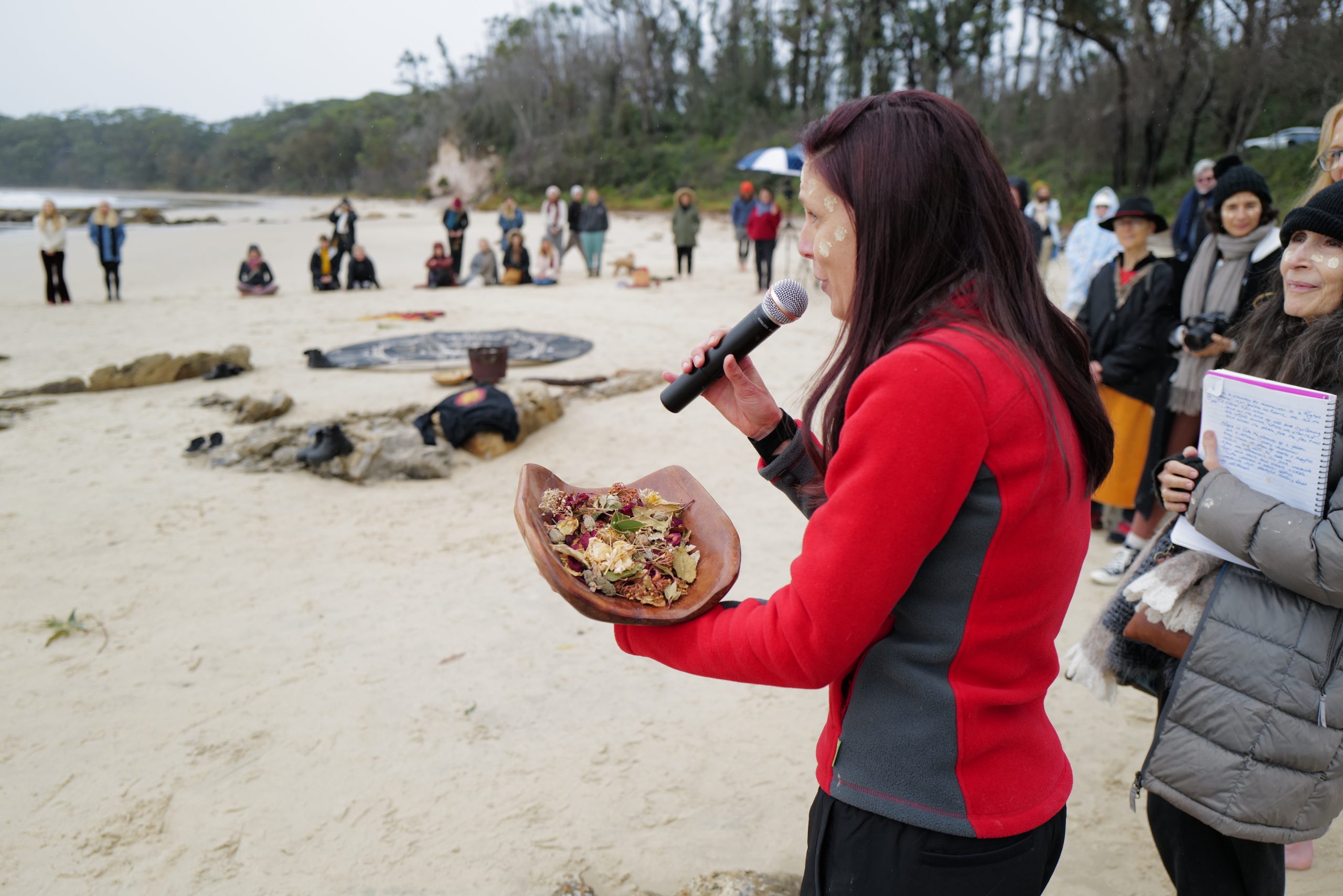 Keen to learn more about Indigenous culture and Reconciliation? Then read the IYTA’s Alana Smith’s account of her personal journey and the Yoga Australia’s RAP launch…

In keeping us at home over the last year, Covid restrictions have encouraged us to look inward, to travel more within our own country and appreciate our homegrown cultures. In Australia, there’s been a groundswell of support for all things Indigenous, especially since the Black Lives Matter protests. The motto of Reconciliation Week this year was “More than a word. Reconciliation takes action”.

All of us within the IYTA have been given an amazing opportunity to become good allies and take action thanks to the huge efforts of Yoga Australia (YA) and Ngungwulah Aboriginal Corporation to create a formal Reconciliation Action Plan (RAP) for the yoga community across Australia.

We were honoured to be invited to the official RAP launch: Yoga on Country, on 21st June 2021 at the beautiful Washerwoman’s Beach at Bendalong, NSW. As a Committee member, I was asked to represent the IYTA alongside Aunty Ros Fogg, a long-term Indigenous IYTA member.

When our President, Astrid Pickup, asked if I was available to give a speech at the Reconciliation Action Plan (RAP) launch on behalf of the IYTA, I was both excited and intimidated. Although I’ve been really interested in Indigenous history for a long time and always felt sympathetic to Indigenous issues, it had all been in quite a distanced way. I’d had very little genuine connection with Indigenous people and culture. I soon realised that if I was going to give a speech genuinely committing the IYTA to Reconciliation Action, I had better get more educated and connected!

I began by reading the whole RAP and Ngungwulah website which led me to sign up for the online Cultural Awareness Training with Jem Stone and Eve White, two Indigenous yoginis. This eye-opening training sparked a starburst of connections and questions. We practised how to give an appropriate and heartfelt Acknowledgment of Country, which initially felt quite awkward as I didn’t yet feel connected enough to do it genuinely – I needed to know more! Jem and Eve made lots of intriguing connections between Aboriginal and Yoga practices, including deep listening (e.g. Dadirri); ethical responsibilities (e.g. Kanyini); and conscious movement (e.g. Wayapa Wuurrk) and I eagerly explored all of these in my own time.
They also highly recommended that we read Sand Talk by Tyson Yunkaporta which explores the ways that Indigenous thinking can inform sustainable living. This turned out to be one of the most electrifying books I have ever read. Tyson is a brilliant storyteller and I learnt so much about the complex patterns and psychology behind Aboriginal philosophy and practices. As an ex-English and French teacher, I was fascinated to learn that in some Aboriginal languages there are far more pronouns than in English. Beyond “I”, “you” and “we”, there are more complex pronouns such as “we two”, “we but not others”, and “we altogether”.

I also attended a blood moon ceremony led by Barkindji man, Michael “Smacka” Whyman at Gumbooya Reserve, an incredible sacred site in Allambie Heights replete with rock art and mysterious portals. With his great sense of humour, Smacka impressed upon us the need for respect for Country and Culture, and how everything is so connected that if you look after it, Country will look after you.

Up until this point, I had unconsciously been thinking of Indigenous culture and issues in “us and them” terms, which had kept me in a state of disconnection and inertia. Then quite suddenly, while watching the Indigenous episode of “You Can’t Ask That” on the ABC, I had a revelation that no matter how we got here, we all have the privilege of living on Country. We have all inherited this precious ancient living culture, the oldest in the world, so we are all its custodians. Hence, it is all our responsibility to care for this ancient knowledge by looking after the knowledge-keepers, and the animals, the plants, the land, water, and sky, that hold this knowing in the very core of their being. This shift in mindset gave me a new sense of authentic connection and participation.

At this turning point I felt ready to craft my speech for the RAP launch. Astrid encouraged me to speak to Aunty Ros Fogg, who is a Dharug elder. Ros has been involved with the IYTA for over 21 years and her background story is fascinating. She was so generous with her time, explaining her work with Muru Mittigar in advancing Aboriginal culture, the need for truth-telling and treaty on the path to Reconciliation, and the political stumbling blocks along the way. With Ros’s insights and support I felt much more confident to stand up and speak at the RAP launch.

When 21st June finally arrived, we were all up early to drive to the pristinely beautiful Washerwoman’s Beach on the NSW South Coast in Yuin Country. The rain hung heavy in the clouds as all of us women were painted with special ochre: 13 dots on our faces to represent the 13 tribes of the Yuin nation and 3 dots on our hands to represent mother, father and child. This matrilineal tribe have been sourcing this ceremonial ochre from a sacred clay pit for thousands of years!
Meeting on the sand, many of us intuitively felt the need to throw off our shoes and connect with Earth despite the winter cold. As we waited for the ceremony to begin, our Yuin host Jrumpinjinbah gave us a sand talk lesson on the Aboriginal meanings of the Seven Sisters star cluster (aka Pleiades).

With yogis tuning in online from all over Australia, the event opened with a 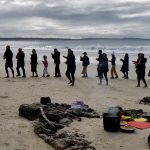 traditional smoking and Welcome to Country ceremony by Jrumpinjinbah and his family. We were invited to stand in circle – the non-hierarchical way of conducting an Indigenous yaan circle where everyone is included and respected. We were led in a deep listening practice to connect with the surrounding Country, and a traditional Yuin dance in which we all stomped and chanted in unison. Jem Stone gave us a taste of the earth-connected Indigenous movement practice Wayapa Wuurrk, which for me was a very grounding, connecting and heart-opening experience. We also witnessed the coming together of the ancient cultures of Yoga and Indigenous Australia through a symbolic dance performance by the Ngungwulah Yaan Circle – 12 Indigenous yogis who have been integral to the RAP consultation process.

As the rain began to bless the proceedings, I stood in solidarity with other great yoga organisations (AAYT, KYTANZ and DRU), and we all gave speeches of gratitude to YA and Ngungwulah and our commitment to the aims of the RAP. To symbolise the meeting of these two ancient cultures, Angela of Dru Yoga brought a Jyotir flame as a gift to Ngungwulah, and I incorporated a Coolamon into my speech, a traditional Indigenous bowl, which was cradling dried flowers from a yogic healing ceremony.

Afterwards we all shared a delicious Indian meal on yaaning mats and I was honoured to have a long yarn with Kirt Mallie, a captivating yogi of Torres Strait Islander descent, alongside my own yoga elder/teacher, Dharmananda.

It was so empowering and inspiring to feel the shared vision and emotion of all the people and organisations who had gathered on that stunning beach in the spirit of connection and healing for this Country. We owe an immense debt of gratitude to Cate Peterson, Patricia Bordon, the Yaan Circle (which includes our own Aunty Ros), Ngungwulah and Yoga Australia for their outstanding efforts in spearheading this reciprocity initiative. Thank you all for being my teachers – I look forward to learning so much more.

The IYTA has lots more coming up in the spirit of Reconciliation. Stay tuned…

(Please note that in the spirit of being a good ally, Alana asked Aunty Ros to review this article from her Indigenous perspective)