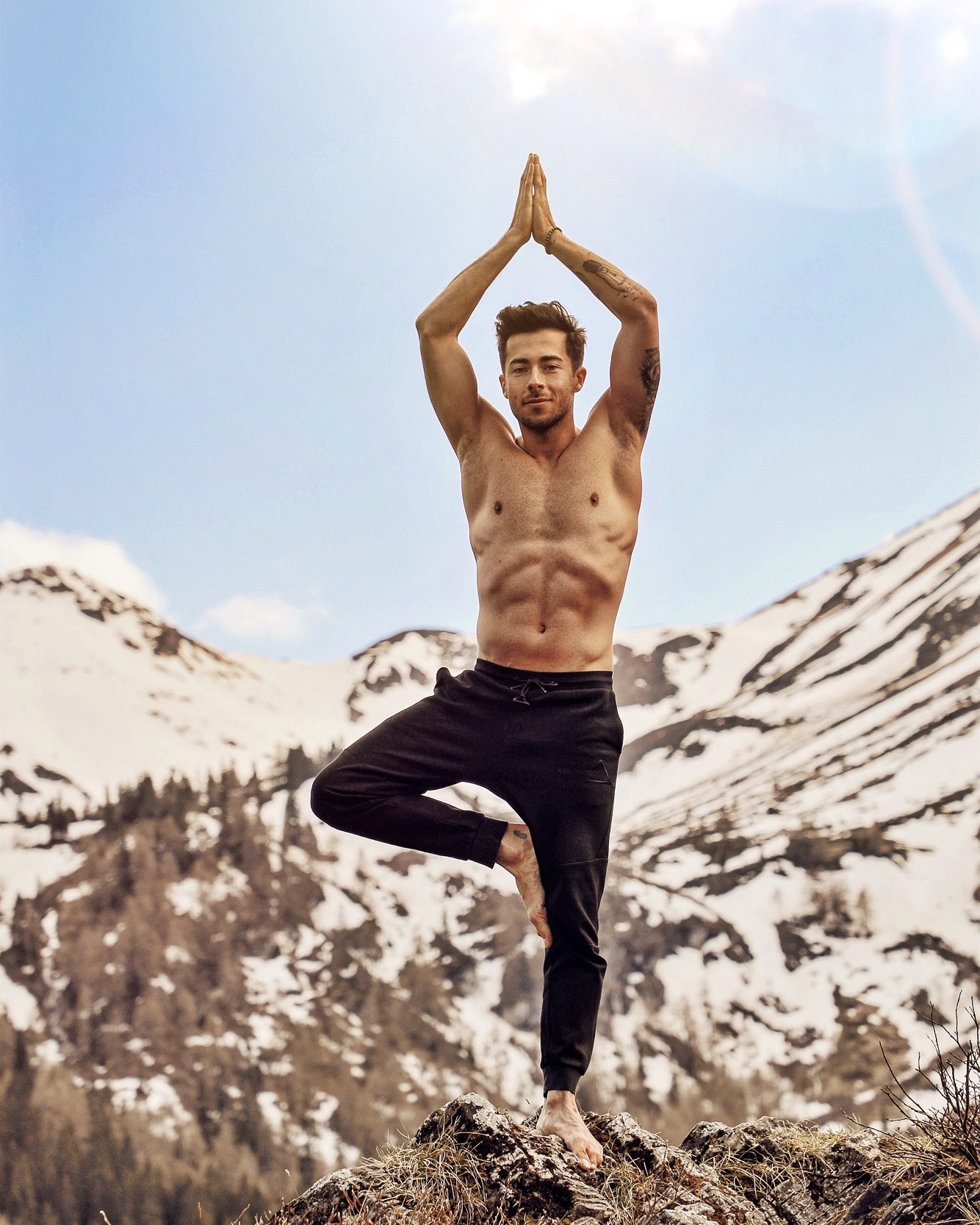 At 26 and having only been a yoga teacher for three years, Marcel Clementi is doing pretty well. He has 55k Instagram followers, sponsorship deals and is a regular on the yoga festival circuit.

It doesn’t hurt that he is easy on the eye and very natural in front of the camera. In fact, he says his first ambitions included being a TV host or PE/sports school teacher – and now he is pretty much combining both in a career as a celebrity yoga teacher.

He discovered yoga after leaving his hometown of Innsbruck, Austria in 2017 at the age of 24 to go travelling. While in Thailand, he hurt his foot, so tried a yoga class. And from the moment he stepped on the mat, he was hooked!

He continued travelling and attending yoga classes and would regularly post photos of his trip and the occasional pose! He already had around 1-2k followers, but the numbers just steadily increased as he posted more frequently.

Then in 2018 he headed to Kerala in India where he studied at the Abhjina School of Yoga and Meditaiton to do a 200 hour Ashtanga Vinyasa courseand become a bonafide yoga teacher. Since then his followers have grown to a point where he is offered free accommodation in return for shout outs on his page, sponsorship deals and is regularly invited to teach at studios around the world.

Due to Covid-19 he’s back in Austria – but staying busy by reading, hanging out with this Siberian Husky Akouna, (who he rescued from the streets of Bulgaria – but that’s another story!).

He says: “At the start of the pandemic it was crazy here. We all stocked up and I still have ten boxes of beans in my kitchen!” But he says luckily Austria has a great health system and shut everything (with the exception of grocery stores and pharmacies) down early on, and everyone stayed home – with police control.

Marcel has been using the time productively – doing more posts and recording classes on YouTube. He’s doing a lot of extra study and philosophical reading and intent on achieving his ultimate goal of being one of the best teachers in the world!

He’s also keen to encourage others to use Instagram – so if you’ve resisted the platform till now or are floundering with a handful of followers, Marcel has some advice: “Just go for it!”

He claims it is possible with time and patience to build up to around 10,000 followers – and here are his top ten tips!

#1 – The secret is to be active. “As soon as I started posting every day, more and more people began to follow me,” he says.

#2 – Use high quality photos and invest in camera editing software such as Lightroom Pro   as Instagram is a visual platform. Marcel now employs a photographer which gives him more time to study and read and prepare posts.”

#3 Offer value –  Marcel says: “I think it is important to give the students some value and benefit a reason to click the like or follow button.” Marcel offers inspiration and information, life hacks and tips.

#4 Use hashtags suitable to your topic: so if your post is about yoga – use yoga hashtags. If you are posting about your dog, use dog hashtags!

#5 Network – Marcel advises connecting with other yoga studios and teachers. He says he messaged another male yogi based in Austria on the App and now they are best mates.

#7 Limit your time online – Marcel restricts his online time to two hours a day as he says it is easy to get caught up and scroll through many hours! It can also be an addiction so set alarms or give yourself specific times to log on (and off!).

#8 Be yourself! Marcel thinks he has grown followers because he is very open and honest. He isn’t too strict – and will drink the odd glass of wine or flat white.

#9 Don’t get down if you get a dislike! Marcel says around 99.9 per cent of the comments he receives are positive – but there will always be the odd mean comment or dislike. But he says it’s about building your own self confidence and all you can do is your best.

#10 Stay active after posting for at least 30 minutes! Marcel says this is a little known tip, but apparently the Instagram algorithms really kick in and always reply to any comments you receive.

Marcel’s last piece of advice is to attend one of his online mentoring workshops!