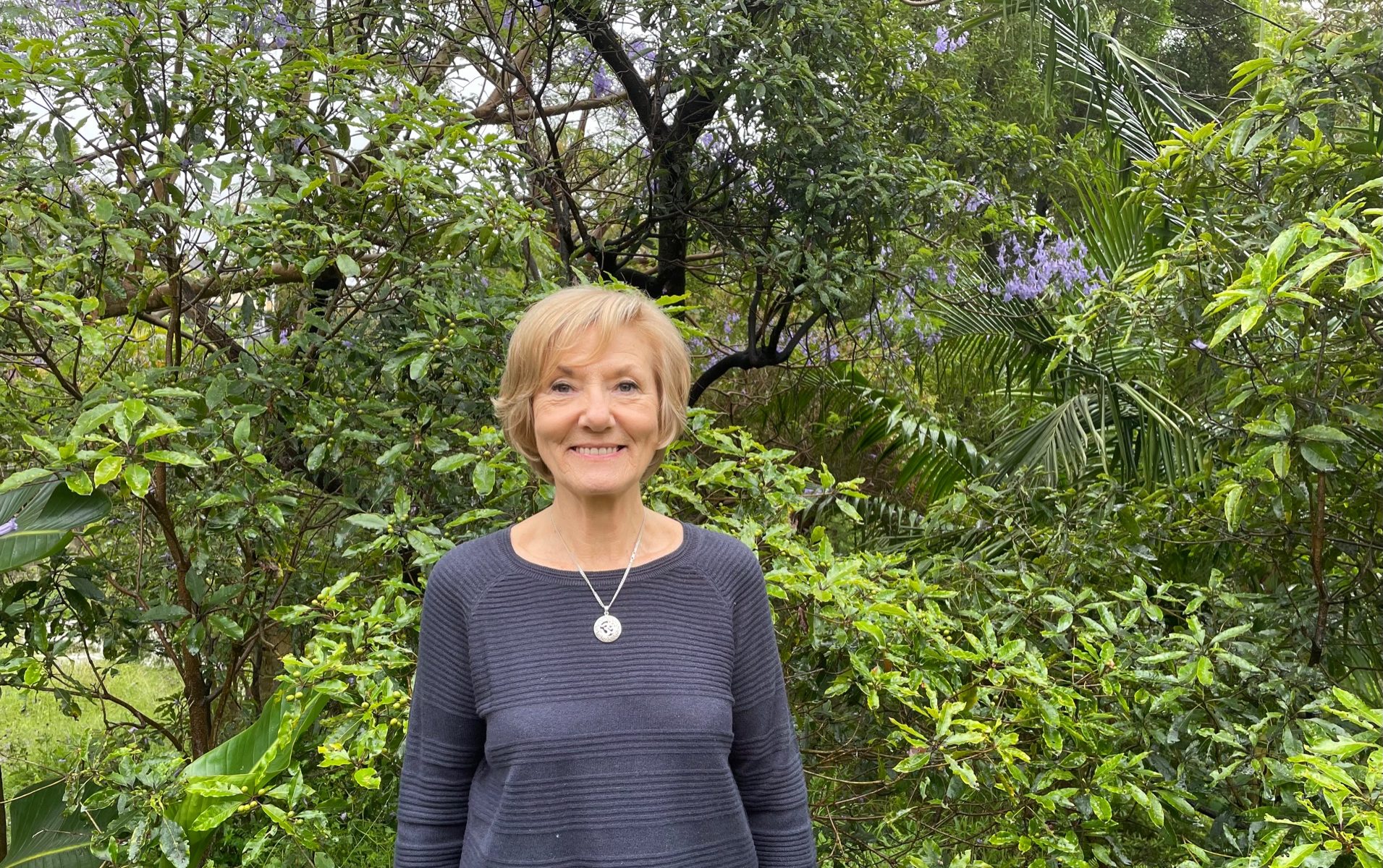 When Sharron isn’t teaching or practising yoga, she can be found reading about yoga! She admits yoga is her life, and is enjoying settling into the role of IYTA President.

Yoga has become an intrinsic part of Sharron’s life. She says: “Yoga gives me a sense of coming home to me. I just love it. Yoga is my life.”

Sharron first discovered yoga as a single mum to her two sons. She needed an outlet from her demanding secretarial job and the pressures of parenthood.

But it was when her boys grew older and she had more time that she was able to attend more classes.

In 2010 Sharron attended a yoga workshop with Satyaprem Gibson who asked her if she’d considered becoming a yoga teacher.

It was the first time Sharron had considered the idea. But the more she thought about it, the more it appealed and so she enrolled in the IYTA’s Diploma of Yoga Teaching in 2011.

‘I loved it!’ Sharron enthuses. There was so much I didn’t know beyond the asanas – philosophy, ayurveda – the lecturers really knew their subject in depth and I just wanted to learn more – and I’m still learning!

And she also loved the IYTA as an organisation – becoming the NSW rep in 2014 and then the Vice President in 2016, family issues meant she needed to step aside. But she’s delighted to be back in the organisation and has been attending monthly Committee meetings for the past year.

Pre-Covid Sharron was teaching 14 classes a week, but is now managing seven classes – both online and in person.

Her own personal practice includes a morning Ayurvedic ritual (which she’ll talk about in our Sangha!) followed by daily meditation.

On non-teaching days, Sharron enjoys an asana practice. As a former dancer, she loves to be physically active but as a Vata dosha, she also needs to be mindful to take time out!

As well as our new President, Sharron is also a committee member on the Australian Association of Yoga Therapists (AAYT).

She says her aim as IYTA President is to continue the great work of Astrid Pickup, Mary-Louise Parkinson and all the Presidents prior.

She says: “It’s a learning curve. I would like IYTA to offer more things online so we can be accessible both nationally and internationally.

“We have such fabulous lecturers on the DYT and all the Post Graduate courses who have such a wealth of knowledge and are experts in their field – and I’d like to get that message out to the wider yoga community.”

“For me President is a word and I’m just part of the Committee. There are many talented people on the Committee who can offer a lot to the community and our members. I work collaboratively and ask for everyone’s opinion before we make an agreement on anything.”

And in her spare time, Sharron loves to read. She says: “I bought a new wingback chair and have a floor to ceiling bookshelf! My mum thinks there’s only yoga books but there are a few mysteries and autobiographies tucked in there too!

And pre-Covid Sharron loved to travel. In fact it was after writing an article about Bhutan for the International Light that Vice President Katie asked Sharron if she’d be interested in the President role. Astrid had completed her four-year term – and the rest, as they say is history!

You can join Sharron and Katie at the December Christmas Sangha on Monday, December 13. We’re hoping to have as many IYTA Committee members as possible there and it will be a chance to connect across the kilometres, chat about Ayurveda, yoga and we’ll finish with a Christmas Guided Relaxation. 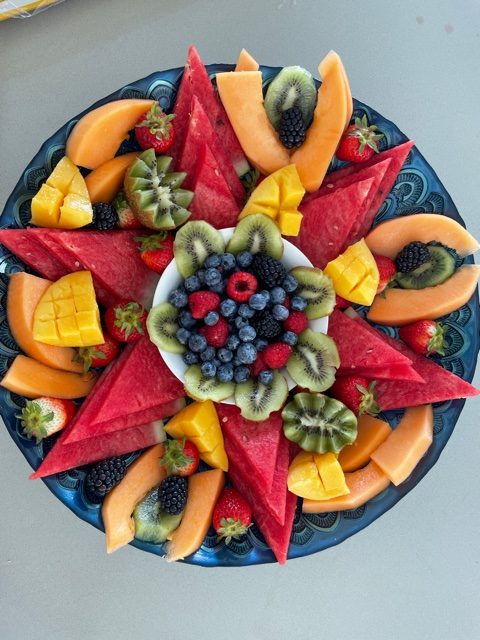 Create some colour with a vibrant fruit platter. This beautiful arrangement is by IYTA Committee member, Amy Seal.

There’s nothing like a beautiful fruit platter to liven up a picnic or complete a summer lunch.

Check out this stunning display by Amy – based on a star. Amy has layered triangles of watermelon and mango and rockmelon segments around a centrepiece comprising of a small bowl of blueberries, raspberries and blackberries surrounded by kiwi slices. Yum!

#1: Did you know most fruits are low in energy (kilojoules) and high in fibre and water, making you feel fuller. This reduces the risk of overeating which can cause weight gain.

#2: The fibre in fruit is also thought to reduce the risk of some cancers, including colorectal cancer.

#3: Fruit is rich in vitamins, minerals and phytochemicals. Vitamins such as vitamin C and E and different phytochemicals may reduce the risk of cardiovascular conditions.

#4: Potassium and magnesium found in fruit have also been linked to lower blood pressure. 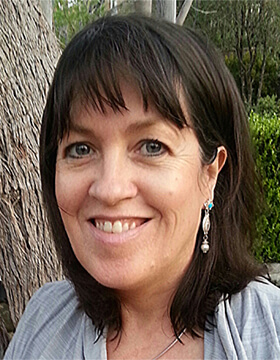 Teaching a safe yoga class is the foundation of the IYTA Diploma of Yoga teaching – our students attend their practice to improve their health and posture and it’s our job as teachers to facilitate this.

With the correct training and a proper understanding of modifications and options for yoga asanas, teachers can be well prepared to assist their students.

This session will be presented online via Zoom and Liz will lead the session. She says: “I want to emphasise good body preparation. The session will be a mix of practical and theory and we’ll start with a full body a warm-up.”

The session will focus on common yoga asanas including: Janu Sirsasana, ustrasana and virabhadrasana 2.

There will also be time for question and answers.

This topic is particularly important now many yoga teachers are holding online yoga classes. Liz says: “I have only taught ten classes via Zoom, as a teacher I found it difficult for me to look at the screen to check everyone’s posture, maintain the flow of the class without compromising my own body too. It’s important that if you are a teacher on zoom then you are mindful that your student can’t always see you and that you select a practise that isn’t too rigorous or complex.”

With all yoga classes, Liz says it is important to reinforce that you are with your own self and not looking to see what others might be doing in the pose. We need to emphasise the non-competitive aspect of yoga and reduce ego within the class.”

Liz runs the Kuring-gai Yoga Centre and has been teaching since 2003. She adds: “If you want to keep up your yoga practice then safety is paramount. If you build a practice with safety at the forefront then you and your students will be able to practise in to their older age in a business sense you will have to have people attend as they know they are safe and they trust you and don’t feel as if they are going out of their depth it is Foundation of the class…

Foster and encouraging this approach by encouraging students to come out of the pose if it isn’t right for their body at that time and to always have alternative poses and practices.

“That’s what we do best at the IYTA – as we want our teachers to understand and know what the best modifications and alteratives are for each pose.”

Liz adds that part of this is encouraging people to mindfully practice for themselves – and being present rather than thinking about what’s for dinner. So they are tuned into their bodies and notice when a position doesn’t feel quite right. It’s also important to encourage two way communication so they are willing to open up to you so you can offer ways to adapt poses.”

This safe yoga experience also encompasses mindful awareness during relaxation practice and using the breath – so it all links to create a safe and nurturing environment.”

Sign up to the free lunch and learn session  HERE