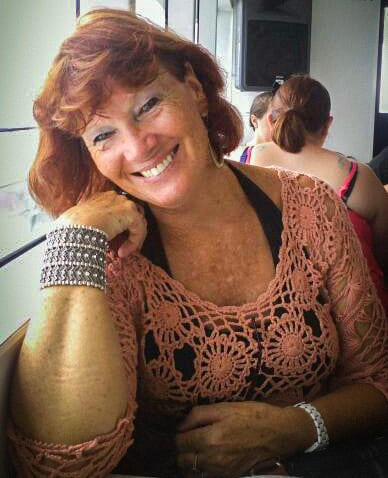 It was a 40th with a difference for Ann Vermeulen when she celebrated her 40 year anniversary of teaching yoga.

Ann and her friends were determined not to let this milestone pass, so they went out to dinner to toast their teacher and share precious memories.

She first started teaching in 1977 after being asked to cover a yoga class at her local sports centre. She says: “I was surprised and said no as although I had been practising yoga for years I wasn’t qualified to teach, but they were persistent and thought I’d make a good teacher, so I made some enquiries and did a correspondence training with Swami Sarasvati.”

“A year later I was presented with my diploma and started teaching at a church hall. I had two sons and was working part-time in retail when I started teaching, and I loved it.”

Over the years Ann has witnessed a massive shift in how yoga is viewed. Two years into her teaching career a new (more conservative) minister joined the church and he believed yoga was evil and so Ann had to leave and find a new venue from which to teach.

Soon after Ann studied Iyengar with Martin Jackson – which was a tough workout. She says: ‘I still remember my legs shaking as I went to the station after a day of practice!’

Then in 1985 she signed up to the IYTA Yoga Teaching Diploma. During this time, Ann and husband Peter built a home in Glenhaven, NSW and converted the garage into a yoga studio.

“It was wonderful teaching from home as I had four classes a week, a loving family and beautiful husband and I didn’t want to get too involved.”

Ann says: “I did about 6-8 trips on the Fairstar and we were able to bring our families along for half price. I would teach every day except for when we were on shore.”

But then in 1990, Ann’s husband, Peter, 48, was diagnosed with bone cancer. Ann became his carer, but sadly he died a few months later.

After Peter passed away Ann focussed on her yoga and built up a successful business. At 61, Ann met Bill who she describes as her second soulmate.  But just six years later he suffered a massive heart attack at work.

Ann says: “Everything stopped again when Bill died. But my yoga students were an amazing support again – cooking meals for me and letting me cry.”

Three years on, Ann is enjoying life once more and running weekly classes. Some of her students have been with her since she first started teaching!

She still works as a massage therapist and does voluntary work. In her spare time, she goes rock and roll dancing and has a Maltese dog called Sparky.

To celebrate 40 years of teaching, Ann and friends went to a Chinese restaurant in Dural, NSW – with more than 70 past and present students, family and friends.

She says: “It was fabulous to feel so much love in the one room and to hear people’s recollections and memories.   It has been a wonderful forty years and I hope to be teaching yoga for at least another ten years!’

To anyone unsure of pursuing a yoga career, Ann says: “I would encourage people to find or continue yoga as it teaches us living skills ad also gives inner strength to cope with the challenges of life and to enjoy the moments in between. Strive to be happy!”

Ann says the main changes she’s observed in her career include: