While most teenagers were our partying all Marion (Mugs) McConnell wanted to do was meditate! “Perhaps it was because The Beatles had recently studied Transcendental Meditation in Rishikesh, India, or after I’d read a book by Guru Ram Das,” she wonders. But either way, she wanted to meditate – the only problem was finding a teacher… 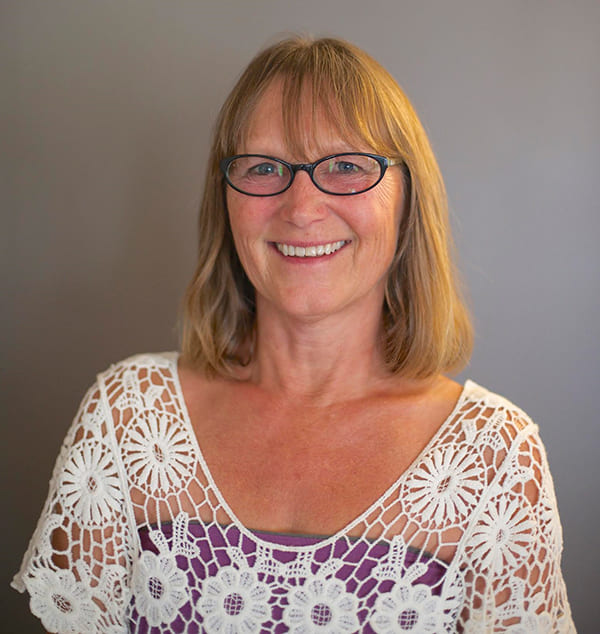 So after enrolling in the University of British Columbia to study Social Work, Mugs continued to do her own practice of Yoga, but without a dedicated teacher, she tended to do postures she loved, such as strong backbends, rather than those she needed. And this, combined with hours of study, led to chronic sciatica.

“At 20, my doctor suggested I take time off to help ease the pain,” she recalls. “So I went to Australia.” Mugs had a pen pal living north of Adelaide, also called Marion, so she decided to pay her a visit. “Her family were fabulous to me and it was while I was travelling around Australia, that I met the Queensland State Rep for IYTA, Val Diakos,” Mugs says. “It was through our conversations that I discovered the IYTA offered a teacher training scheme.” But the training was held once a month over the course of a year, not a viable option, as Mugs didn’t have the funds or visa to be able to stay in Australia. She considered training with the IYTA in the UK, but after contacting Velta Snikere Wilson, she discovered the set up was the same there too. “Velta suggested I contact a lovely Yogi in America – his name was Dr Hari Dickman,” Mugs says.

Hari was about 80 years old and had been taught by many of the yogi masters including Paramahansa Yogananda.

He suggested Mugs attend the Sivananda Yoga Teacher Training with Swami Vishnudevananda and so at 22, Mugs went to the Bahamas where she graduated as a Yoga Acharya. Of course, by this time, her sciatica was history…

Mugs spent a further three months teaching at the centre and the following year became a live-in student with Dr Hari Dickman. “Yoga was all I thought it would be and more,” Mugs says. “I was filled with love and felt as if I had finally come home.”

Mugs didn’t return to her University degree, preferring instead to dedicate her life to Yoga – and soon after she became a full teaching member of the IYTA. In 1979, Mugs returned to her home town of Penticton where she taught at the local community centre. Her classes soon took off and she found herself teaching the general classes as well as young adults, mentally handicapped, mentally ill students and the elderly. “Although yoga was relatively unknown, the community supported me,” she says.

Mugs continues to be an avid reader of International Light and a keen member of the IYTA – and at the Puerto Rico IYTA Congress she was delighted to be asked to be the Canadian representative. Two years later she presented at the IYTA Congress in Spain. “I gave a talk about Yoga and Backpacking,” Mugs says. “At the time, my sister, Jo and I had done two separate hikes – both from Mexico to Canada. On the Pacific Trail we had walked through the mountains and deserts of California, Oregon and Washington. It took us six months and we covered about 2,800 miles. A year and a half later we hiked the Continental Divide from Mexico to Canada covering more than 3,000 miles on foot, sometimes using snowshoes as we crossed mountain passes over 12,000 feet. It was an amazing experience. Jo is an artist – and every day we’d stop in the wilderness – Jo would paint and I’d do my Yoga.”

“I refined my practice to help keep my muscles loose and long while staying strong for the hike.”

By 1994, Mugs had joined up with other Canadian teachers who had moved to her local area to form the South Okanagan Yoga Association (now known as the South Okanagan Yoga Academy or SOYA)– where they taught their own 500-hour Yoga Alliance Registered Teacher Training, so that finally students were able to qualify without leaving the country. Mugs ensured they created the training to be thorough and equally inclusive of asana and philosophy and to meet IYTA standards.

Three years later she attended the IYTA Convention at Uluru, Australia, where she a talk about Karma and Reincarnation. At the congress, IYTA president, Moina Bower gave her approval that Mugs could oversee exams for Canadians who wished to become full IYTA members – which helped the Canadian membership of the IYTA flourish.

Mugs and her husband Robert (also a yoga teacher) now run the teacher trainings with other teachers trained through SOYA. And for the past seven years, they have been dividing their time between homes in Canada and Mexico, running trainings in both countries.

They also hold an Annual Yoga Retreat in Naramata, BC bringing in world renowned teachers so other can benefit locally from their ideas. Including Yogis such as Erich Schiffmann, author of: Yoga: The Art and Practice of Moving Into Stillness and Rod Stryker, author of The Four Desires.

“There is nothing in my life that isn’t yoga,” says Mugs. “No matter if it involved adult children, grandchildren or anything else. I come from my centre and my centre is filled with yoga. Each day I say to myself: I am a Spirit expressing myself through form. How would I like to express myself today? And then off I go into each new day.”

In 2012 Mugs was formally honoured when she was presented with the Queen Elizabeth II Diamond Jubilee Medal for her forty years of yoga service and for representing Canada abroad. Mugs says: “I was humbled and thrilled that the Canadian government would recognise yoga as such a contribution to the community.”

The IYTA now has hundreds of members based in Canada and over the years, Mugs has trained more than 300 teachers. “It really is rewarding. But I don’t think of myself as having found yoga, I think the yoga path found me. And the IYTA has been a huge, huge part of my journey – always inspiring and supporting me as a teacher.”